Writing is freaking hard… There’s no point in denying it. If you feel like it’s painless, then sorry to tell you that you’re most likely a lousy writer.

When a student recently confided in me that they felt bad because they really struggled writing (although their writing turned out to be excellent), I jumped on the occasion to tell them that writing was awfully difficult for me too; always has been, and probably always will be. My confession seemed to help them tamper the guilt caused by their writing struggles, so I would like to share my perspectives here that it can help others.

My story with writing

I’ve always been great with grammar and spelling, as I really enjoyed learning the logic behind them –note that I’m mostly talking about French, my native language, which has pretty interesting grammar and spelling rules, as well as plenty of exceptions to these rules! On the other hand, I absolutely used to suck at writing essays in my French classes during most of my middle and high school years.

It’s only when I went to college that I started reading technical books (Internet wasn’t one of primary sources of information at the time at the time, books at the university library were) and enjoying when they were well-written; or maybe more importantly, disliking them when they were poorly written, and learning to appreciate the difference.

I remember my first positive experience with technical writing pretty clearly. I had to write a report about a school project, in which I wanted to explain the algorithm I had developed to make a 3-wheeled robot slalom between bottles of different colors. The algorithm made use of different sensors on the robot in order to activate different motors at different speeds. I remember spending a few hours rewriting the same couple paragraphs many times and being unsatisfied with the result. Helped by my mom on a Sunday afternoon while visiting my parents, I finally got to a point where my explanations were crystal clear. Each word had found its perfect place. It felt exhilarating.

Pursuing a career in academia, technical writing became part of my job: master’s thesis, PhD thesis, publications, etc. That said, it’s never gotten any easier. It’s stayed the same frustrating process: it usually starts by the blank page syndrome and is followed by an absolute struggle to write each sentence, each paragraph. The only good part, the one that makes it all worth it, comes at the end, once I finally realize that my document is well-written and makes sense; that each sentence has a purpose, and that my reader(s) may actually enjoy their experience.

I recently wrote two papers which got accepted for publications, and were praised by reviewers for being well-written. I detail some of their writing process below.

This first paper was for a project called LupIO which I designed and implemented earlier this year.

Writing this paper wasn’t actually that bad because I was really excited about this project, and knew pretty well how I wanted to present it. As you can see in the figure below, it still took a bit of time to write: about 3.5 weeks mostly on Tuesdays and Thursdays (these were my non-teaching days in the spring), for a total of over 16 hours. 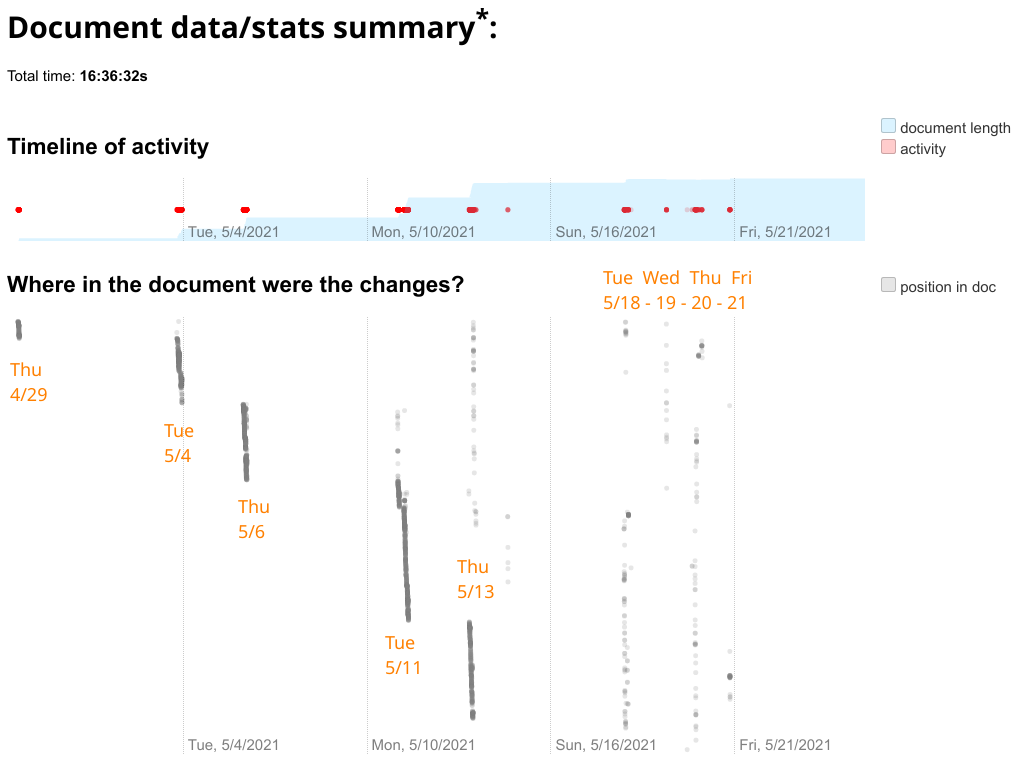 You can also see, from the bottom part of the figure, that I wrote this document very linearly. From Thursday 4/29 until Thursday 5/13, I pretty much wrote the paper in linear order, from the introduction to the conclusion. The last week, prior to the deadline (on 5/21), the modifications span the entire paper as I was making adjustments.

To give you a concrete example of my writing process, here is a animation that shows the writing of the introduction’s first paragraph, which took me about an hour on the first day. You can also see how I started by defining the overall outline for the paper before tackling this first paragraph.

This second paper was about a student-led course which I helped designed in FQ20 and that was taught twice in WQ21 and SQ21.

Writing this paper was an insane struggle. I thought it would be easier because I was starting from a draft that the student instructors had co-written together, but rewriting everything from my own voice and also having to get deeply familiar with the course itself (to the point that I could teach it myself) was painful. It took 2.5 weeks of almost full-time work to rewrite the paper entirely.

Most days, writing a single sentence that I was satisfied with could take me up to 30 minutes and I’d sometimes need a 15-minute break afterwards to rest! I honestly felt like giving up a few times, and it’s really only after writing the entire first draft that I finally got convinced that the paper had some decent chances of getting accepted.

Here is a figure that shows some stats about the writing. 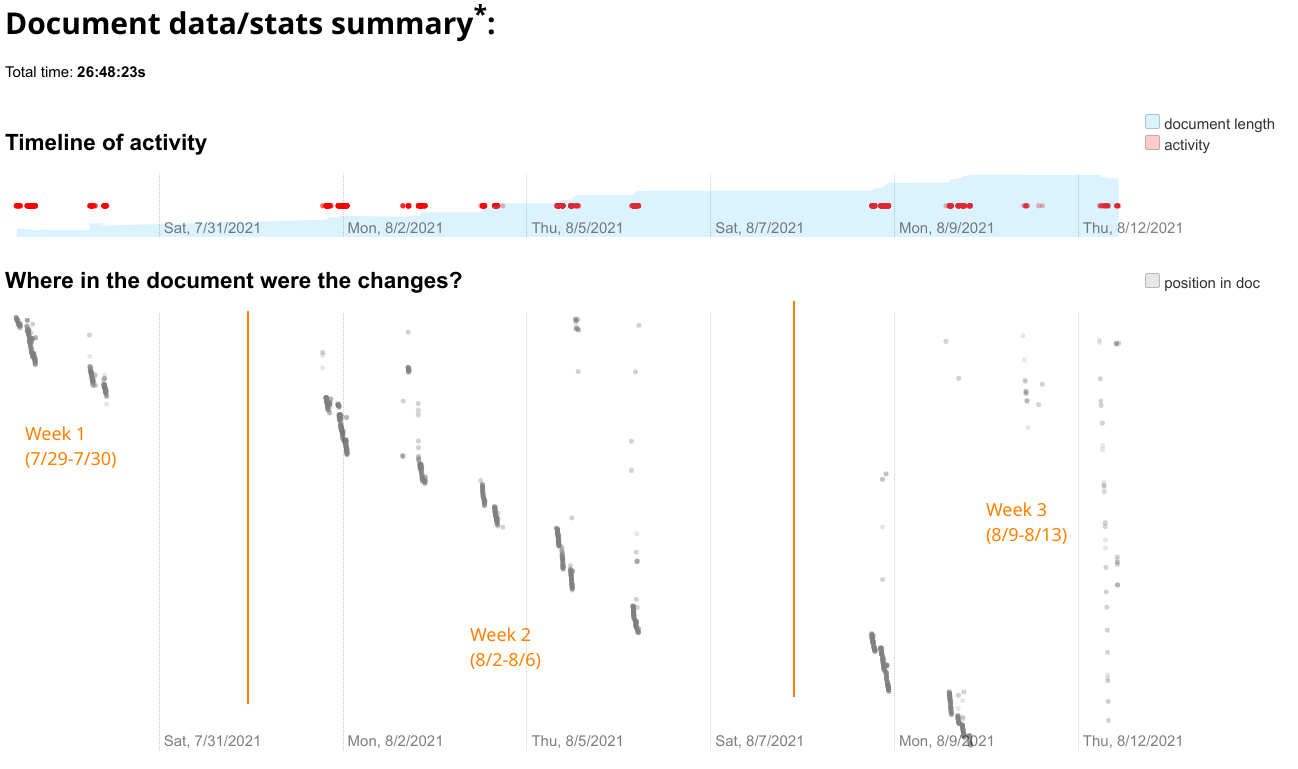 As you can see, my writing is again very linear, progressing from introduction to conclusion with very little back and forth. It’s only during the last few days, after I had an entire first draft and received feedback from my co-authors, that modifications span the entire paper for the final adjustments.

Just like for coding, some computer scientists have this blasé attitude that either you’re a natural or you’ll never belong. It’s obviously not true. For maybe one true natural, the 99 others will have to work really hard to become a talented coder or writer.

I will repeat it again: writing is painstakingly difficult. So don’t feel ashamed if it’s the case for you. You’re probably doing it right.

The figures and animation were done by Draftback, an amazing Chrome extension that can play back the revision history of a Google doc.