This article was co-written by Maddii Brigham

This study was recently accepted for publication at the conference ACM ITiCSE 2021, which will take place at the end of June 2021! You can read our paper here if you’re interested in learning more. This article is a summary of our paper.

Hi! My name is Maddii Brigham, and I’m a third-year Cognitive Science and Computer Science double major at UC Davis.

I took ECS 50 (our computer organization class at UCD) with Professor Porquet-Lupine Fall Quarter 2019. After the final, I reached out via email to thank him for the quarter. Instead of responding with a quick “have a good winter break”, Joël explained some interesting patterns he had noticed while wrapping up class grades.

For one, I had managed to finish with the highest grade in the class. However, after the extra credit that came from participation was factored in, another (male) student who had been much more active than me on the class forum ended with a higher grade.

Interestingly enough, when looking at the forum statistics, I was actually the top female contributor, but ranked only 20th when considering the entire class (of about 150 students that quarter). This could be partially explained by the fact that most of my forum contributions were in the “follow-up discussions”, instead of being in the more prominent “students’ answer” area, which earned me fewer participation points. This seemed to be a habit of other female students as well.

Joël also felt that, in general, the forum had been especially male dominated that quarter, and he reached out to me to see why I wasn’t participating more, and if I had any ideas of how to better engage female students. From there, we decided to look further into gender and participation in CS classes!

We spent about a year gathering the data from core CS classes that Joël taught and analyzing it. We looked at 2 quarters of ECS 36C (our data structures and algorithms class) and 8 quarters of ECS 150 (our operating systems class). The overall gender repartition was about 75% male and 25% female across all classes.

In both courses, the participation extra credit is 3% and is determined by three categories:

In terms of final grades, the concrete impact of participation extra credit is letter bumps, that is when a student’s final grade goes up by one letter due to the extra credit. We were a bit surprised to find that males and females received letter bumps at almost the same rate (but it’s frankly great!). Since it was our initial perception that CS classes were male-dominated, when it comes to participation, we looked at the decile distribution between genders. Now, we found a low percentage of females in the top and bottom 10% of scorers but a high percentage of them in the middle deciles. This showed that our perception was correct, in spite of the letter bump rate ending up rather close between males and females. 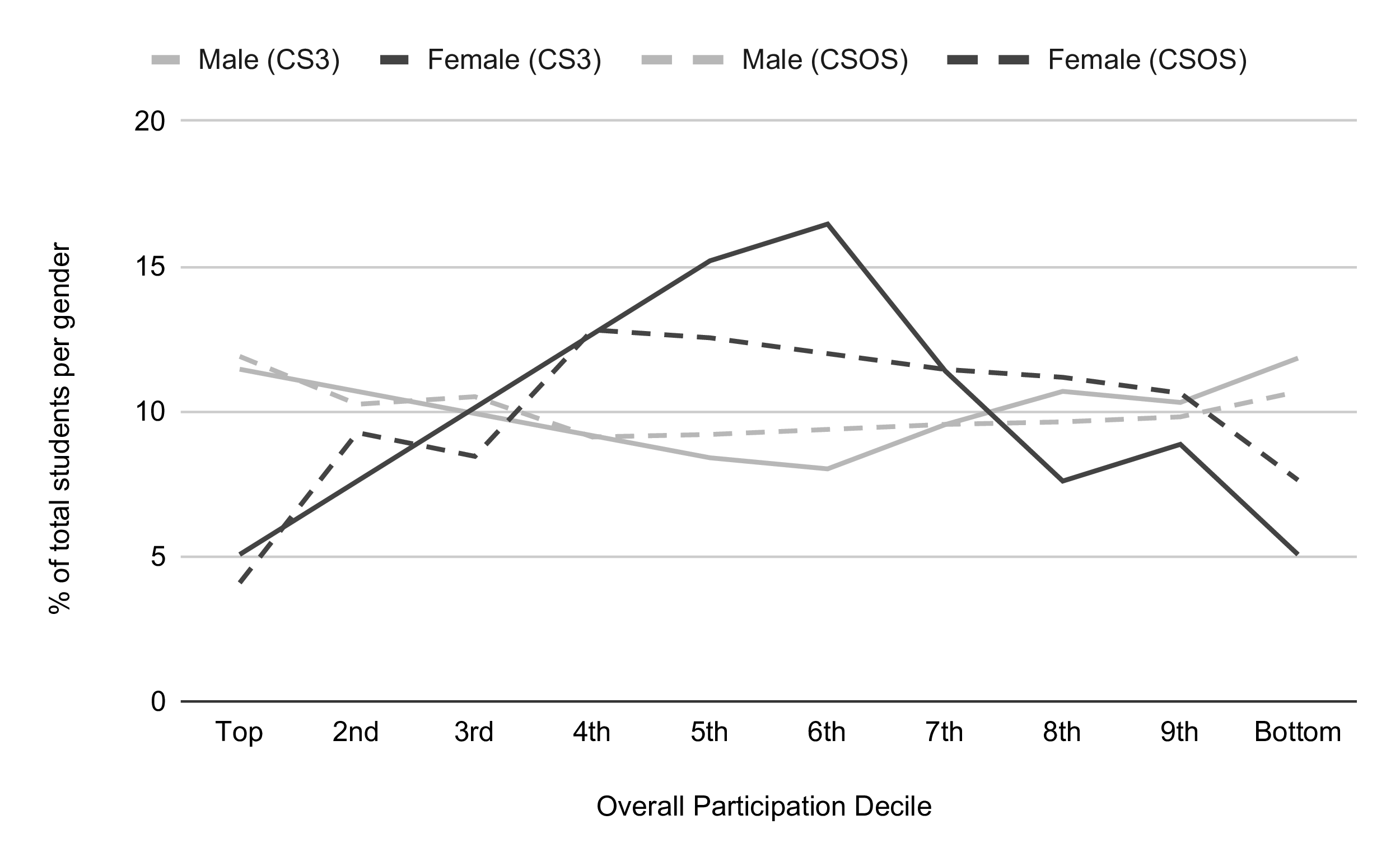 If we skip lecture participation (there are so few students who participate in lecture that it’s difficult to draw any relevant analysis) and focus on forum and survey, it is interesting to look at the decile distributions between genders.

For the forum, we see a low percentage of females in the top few deciles of scorers, but a high percentage of them in the mid to low deciles. 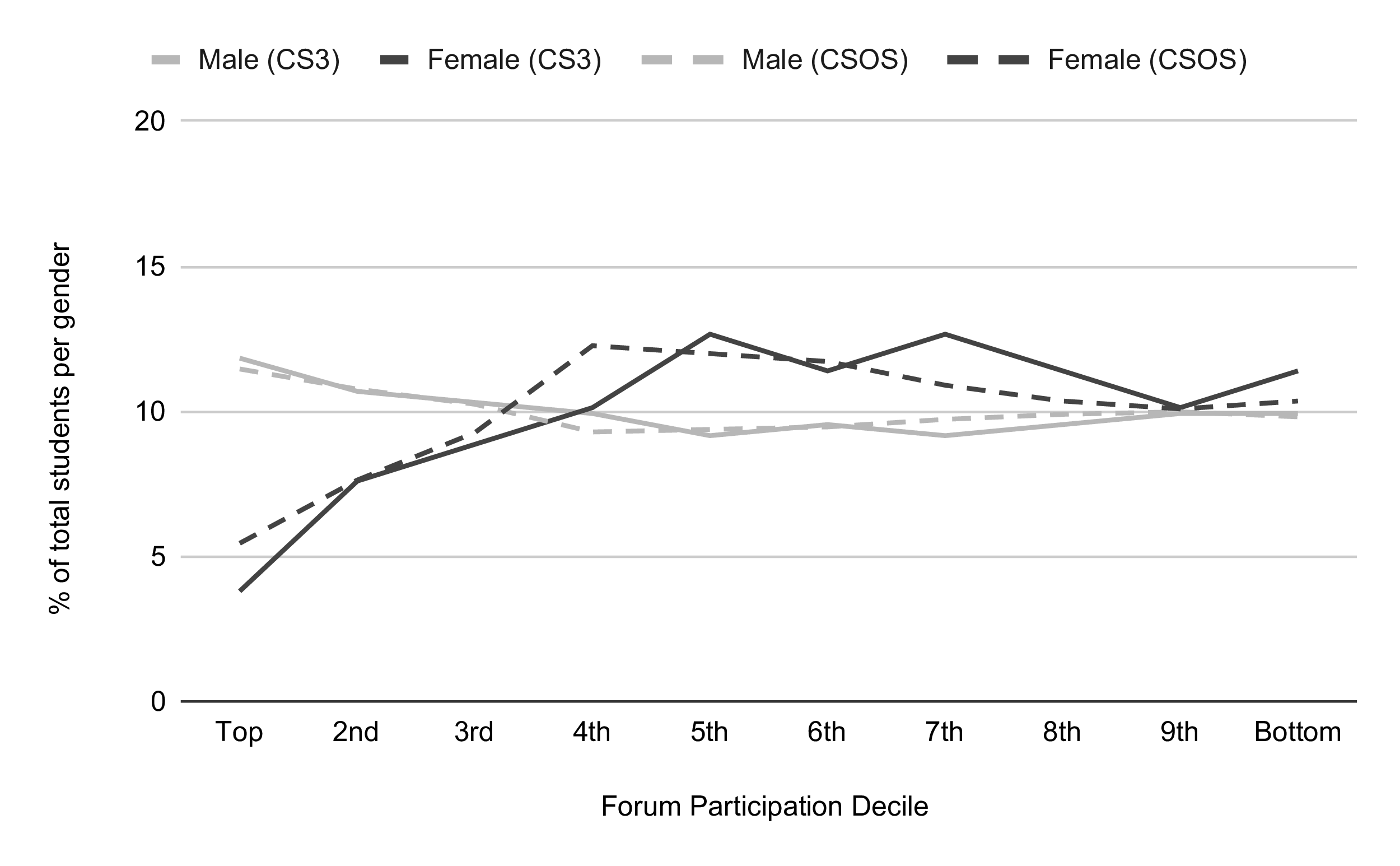 On the other hand, for the surveys, it’s the opposite: we see a very high percentage of females in the top 50% of scorers. From our data analysis, it’s clear that male students dominate most public forms of participation. This is probably the reason that CS classes often feel so male-dominated (in addition to the unbalanced gender ratio in the first place).

Fortunately, because the participation extra credit in the considered classes did include diverse forms of participation –some public (lecture and forum) and some more anonymous (surveys)–, males and females benefited from letter bumps at about the same rate.

We are currently working on two follow-ups to this study: